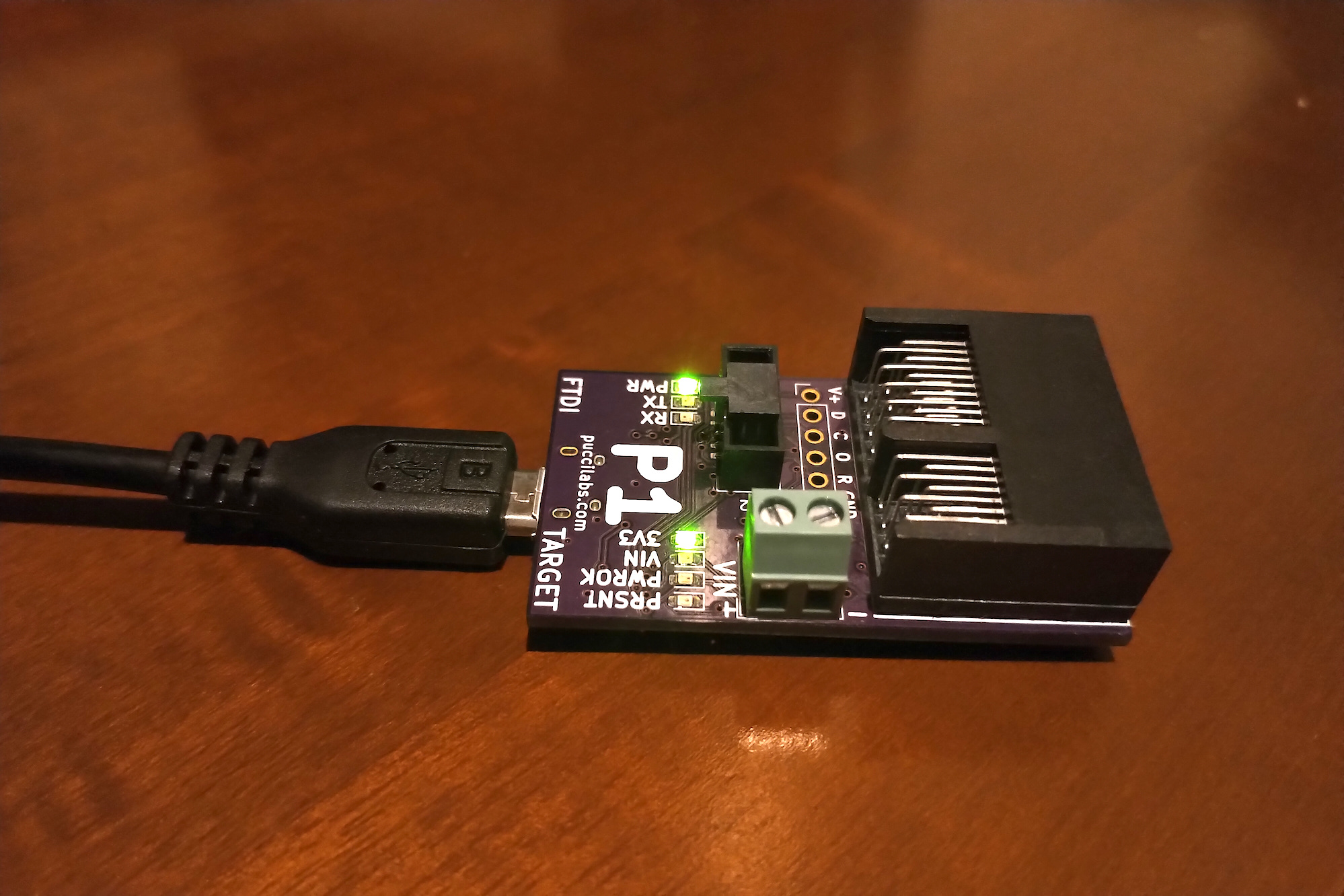 The objective of this guide is to demonstrate how to program the P1 Programmer using pyftdi with a Linux based machine. Once it has been programmed, it can then be used to interface with other Vespucci modules for testing and flashing.

The P1 programmer utilizes the FT231X to interface with UART devices with full handshake via USB while also providing four GPIO pins (CBUS) that are independent of the UART interface. FTDI chips typically utilize the virtual com port driver (VCP) to bridge USB to UART, but programmable control of the CBUS requires the use of FTDI D2XX driver. The figures below are from FTDI Application Note 184, which describes the various I/O states, and from the FT231X datasheet to describe the potential CBUS functions of interest. In particular, our design will utilize the TX LED, RX LED and GPIO functions. 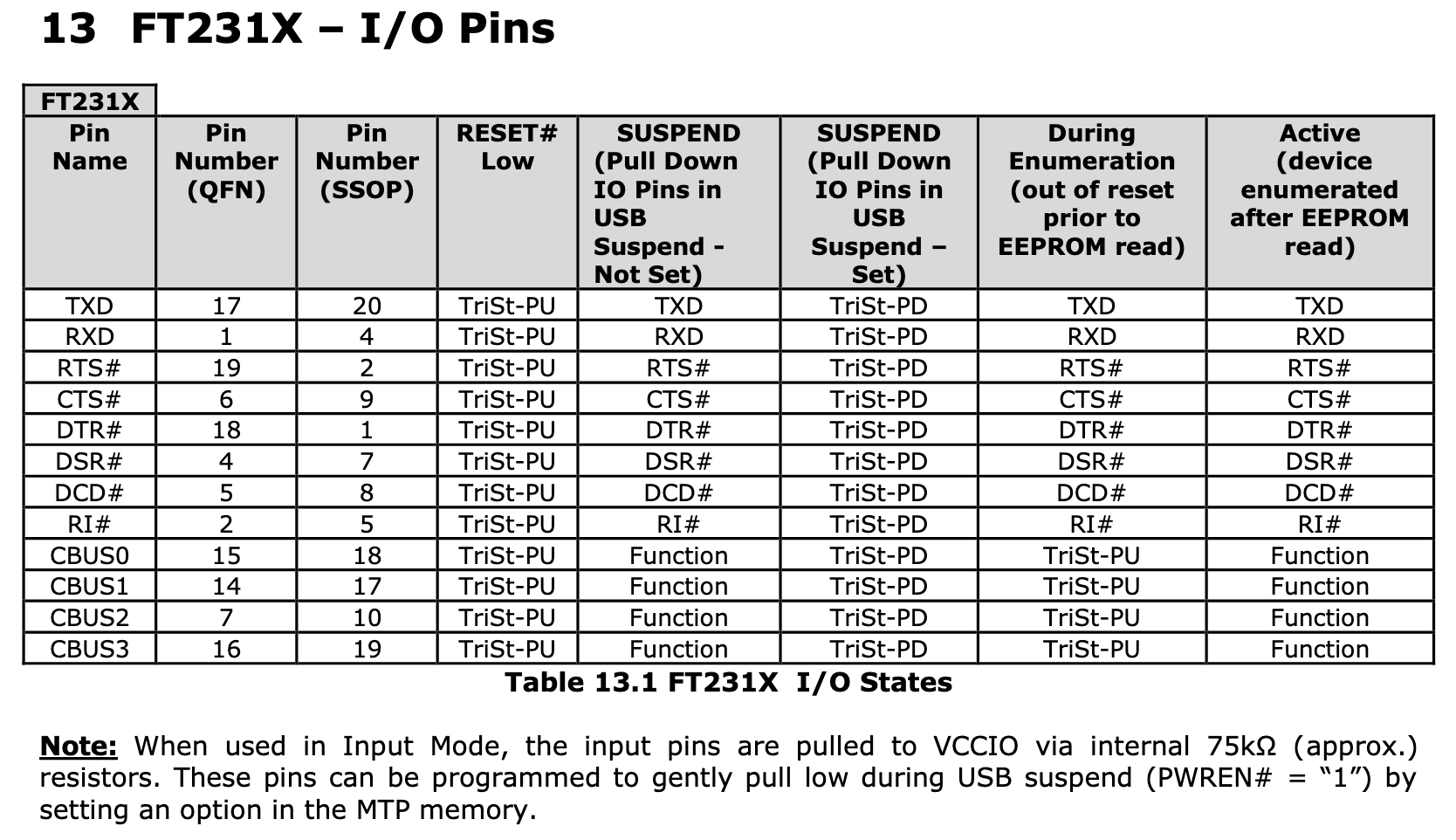 Vespucci modules are designed to utilize most of the full UART signals, so all lines except for the DSR will be used by the FT231X. The following figure describes the pinout for the FTDI IC. Of note, the only pins that require programmatic control are CBUS0 and CBUS3. CBUS0 serves as a power on signal to wake attached modules. CBUS3 serves as a signal to power the 3V3 bus for attached modules. The bus power signal can either be sent by the FTDI chip or from an attached Black Magic Probe. A more complete schematic can be found in the PCB GitLab repo. 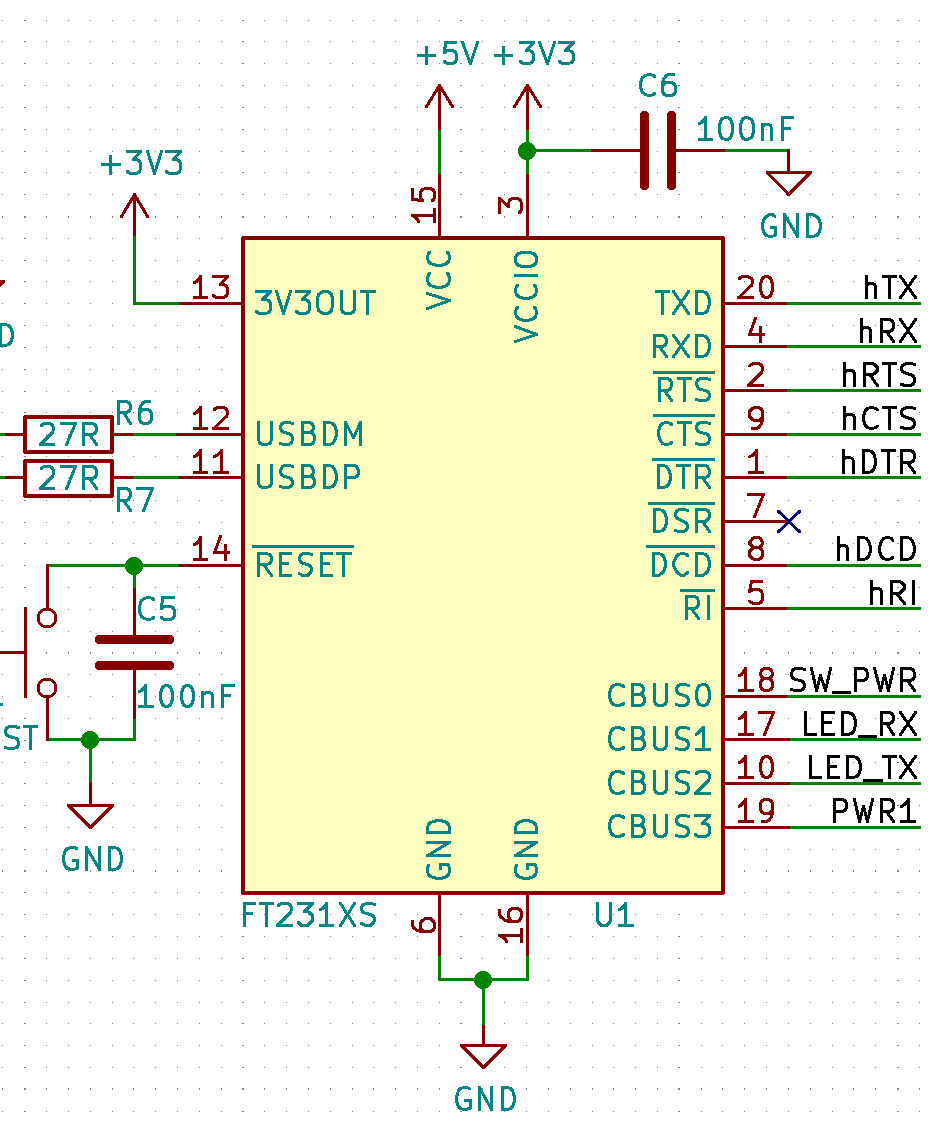 FT231X Pinout on the P1 Programmer.

The programmer will be programmed and controlled with pyftdi on Linux, which provides a Python wrapper for an open source variant of the FTDI D2XX driver. I’m using pyftdi because that is the first library that worked for me and it seems to be actively updated at the time of writing. With respect to other systems, I ran into permission issues when using OSX where serial access was restricted and I couldn’t solve the problem. Windows was providing segfault issues and Ubuntu on a hypervisor or WSL had trouble finding the programmer or ran into segfault issues as well. I did find that using a pure Linux OS worked without an issue - in this case, a Raspberry Pi 3B with a Debian image. The following instructions are more or less copied from the pyftdi installation guide. Another benefit of pyftdi is that the EEPROM can be flashed without needing to use FTDI’s FT_Prog utility. This will allow us to use a custom VID PID code when we’re able to get one without needing to recompile a Windows driver.

In the 11-ftdi.rules, enter the following and save the file:

Some of the settings on the FTDI chip should be changed on the P1 such as the CBUS pins as outlined above and the maximum current, which is set to 300mA for driving downstream modules. A config that is ready to go can be downloaded from this link and can be programmed with the following command.

The device hexdump isn’t particularly necessary, but I’ll post it here in the event that it’s useful for someone later on. The last string, PL5J9KNY, is the device serial number and should be varied between devices.

There you go! You have now programmed the P1 Programmer so that it is ready to use with other Vespucci modules.

A forum will eventually be implemented to have discussions around posts. For now, feel free to reach out via email.

You may also enjoy